Italian collector (and Universal Geneve aficionado) Mr. A and I researched the Film Compax 22522. A watch with only 7 known examples, it is considered a grail in the UG sphere. Let’s have a closer look at this rare reference.

But before we do so, a brief background for those who aren’t that familiar with Universal Geneve. Universal Geneve (UG) was founded in 1894 and soon rose to become a pioneer in the manufacturing of chronograph movements as the popularity and subsequent development of wristwatches spread in the 1920s and 30s. Having their own movement manufacturing facility named Martel, UG was able to provide chronograph calibers for many major Swiss houses, such as Jaeger-LeCoultre, Zenith and Girard-Perregaux to name a few. The brand is most recognized for its aesthetic diversity, with an incredible array of case and dial designs, which was achieved by using two base calibers: 281 and 285, on which UG could simply increase the main plate size to house movements in different sized cases, allowing for an extremely versatile design and production line. Furthermore, cherished models such as the Aero-Compax, the Tri-Compax and the Dato-Compax are all complications added to their base chronographs with dial configurations unique to Universal Geneve. UG is out of production today and the brand is being held dormant by the Stelux holding company in Hong Kong. This aspect is something that really resonates with collectors today and gives this brand a unique characteristic: being held alive purely by the collective passion around their watches. 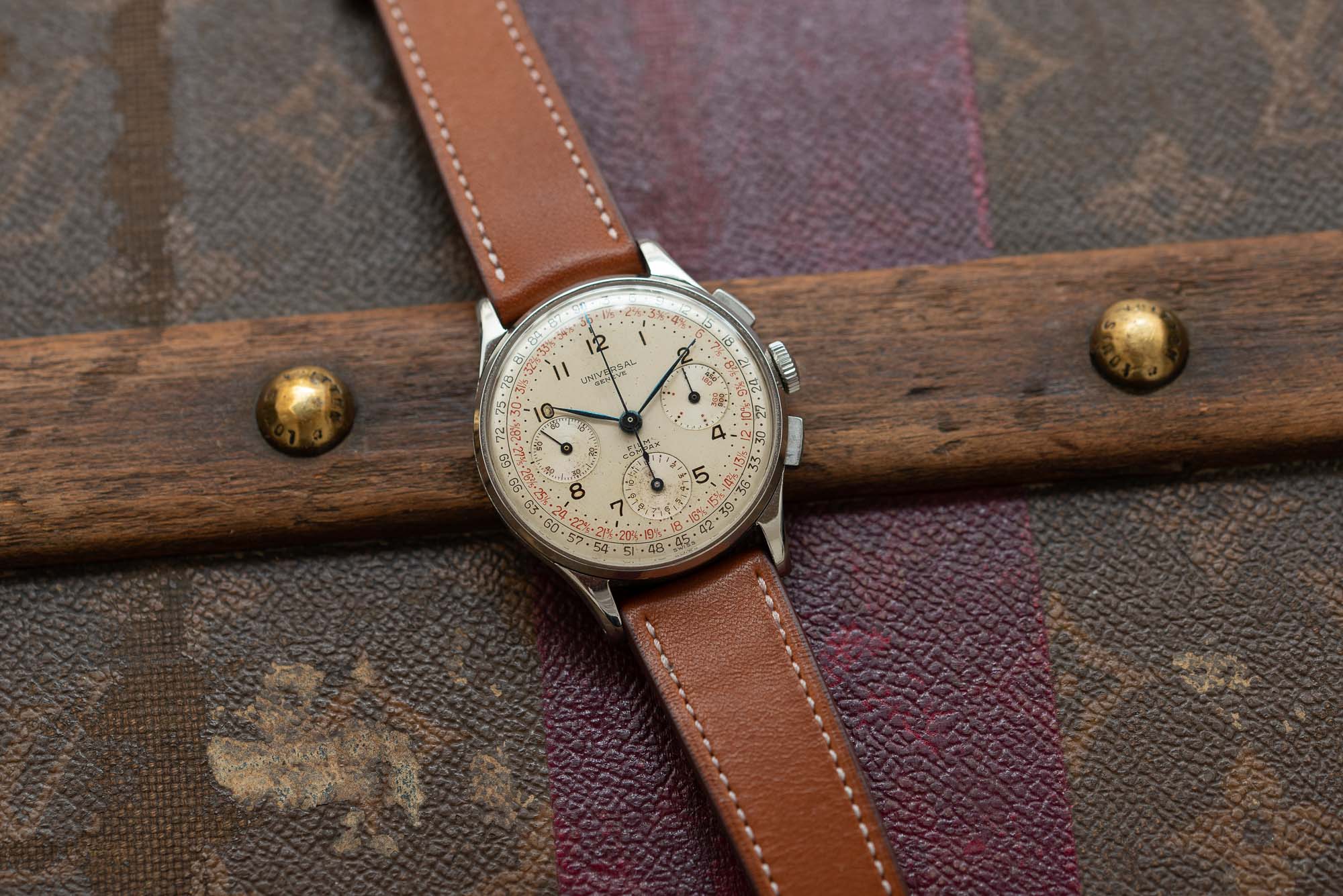 As with any brand, the rarer and more unique specimens often are the ones that are most collectable and sought-after. The Film Compax is probably the best example of these exceptional chronographs as it is not only incredibly rare but also considered a grail in the UG sphere of collecting with only 7 examples have surfaced to date. One of these examples recently became available for us to study and picture in detail in this article.

This Film Compax reference 22522, to the best of our knowledge, is the only wristwatch chronograph to have been made and intended purely for cinematographic purposes (though examples of Heuer pocket watches with similar dial scales have appeared). Given that these watches were commercialized only in 1945, it is potentially evidenced that these were made especially for US filmmakers since they were active at the time while Europe was still recovering from World War II and cinema industry had stalled. 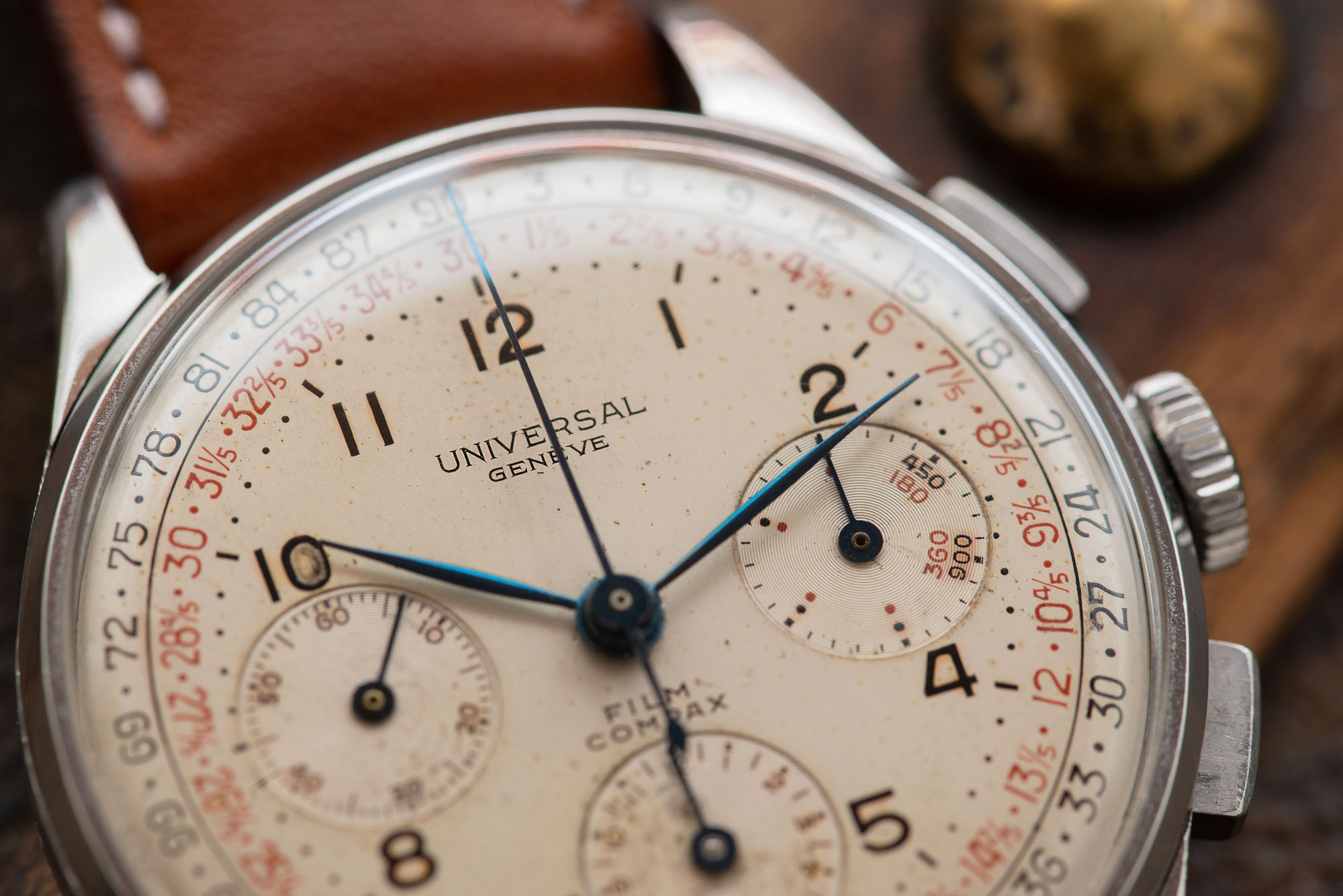 What truly sets this watch apart is that instead of the usual tachymetric, telemetric or pulsations scale, the Film Compax differs by having a unique scale on the dial: one that indicates the amount of film tape used in feet per second.  The 2 different coloured scales represent 16mm (red) & 35mm (black) film size, in accordance to the industry standard (back then) of 24 frames per second. For instance, it would take 40 seconds to use 24 feet of 16mm film, but only 16 seconds using 35mm film. The minute register located at 3 o’clock measures increments of feet per minute for both types. 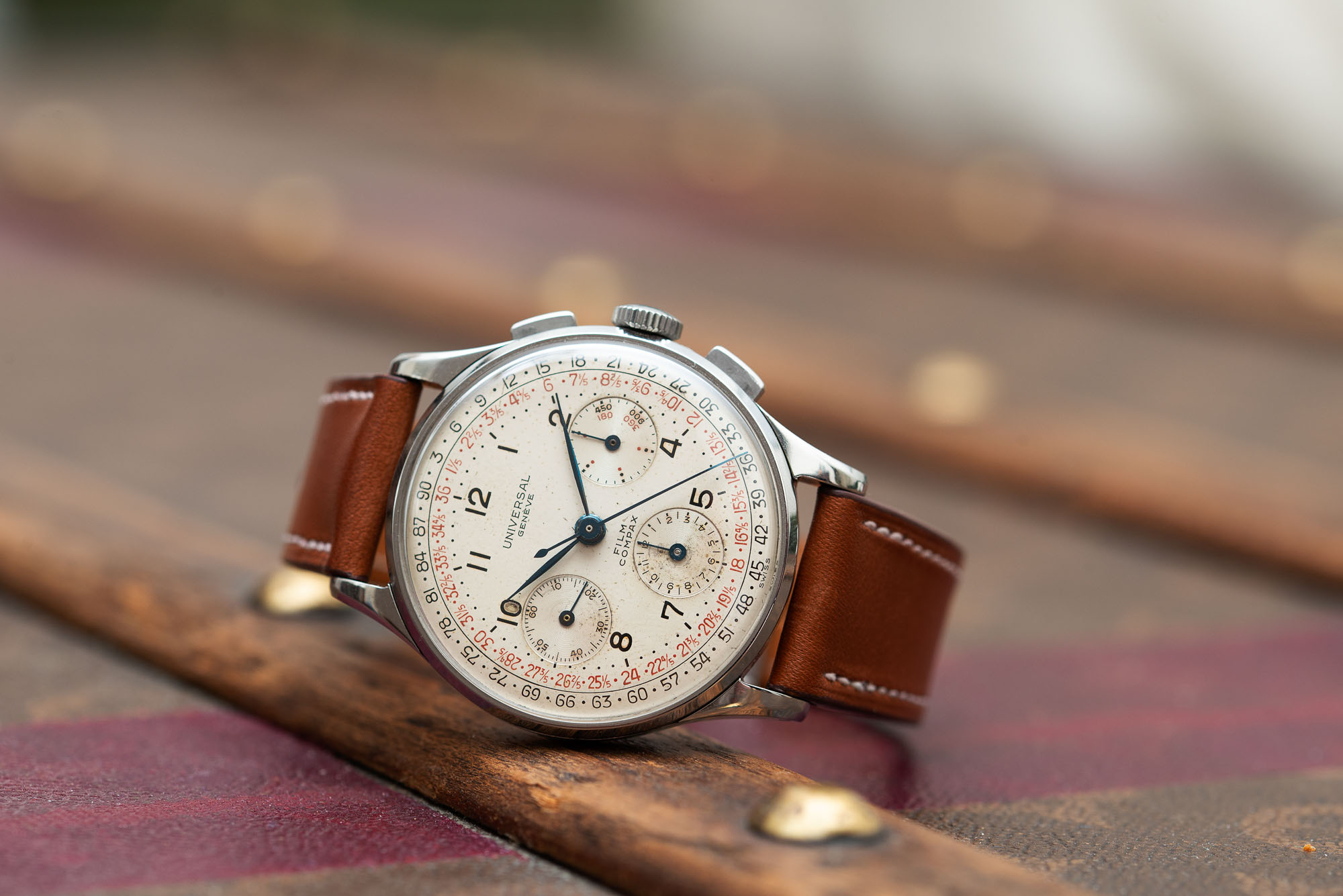 The reference 22522 is predominantly associated with the Film Compax today, although other examples of UG chronographs with the same case reference, in a more typical Compax-only configuration, do appear in the archives and online. Moreover, the Film Compax configuration of the 22522 seems to have a few particular traits which distinguish it further from other 22522 models known. For example, both the serial and reference are stamped on the inside of the case back, a not so common practice for steel UGs at the time. Other 22522 have appeared with reference and serial on the outside of the case. 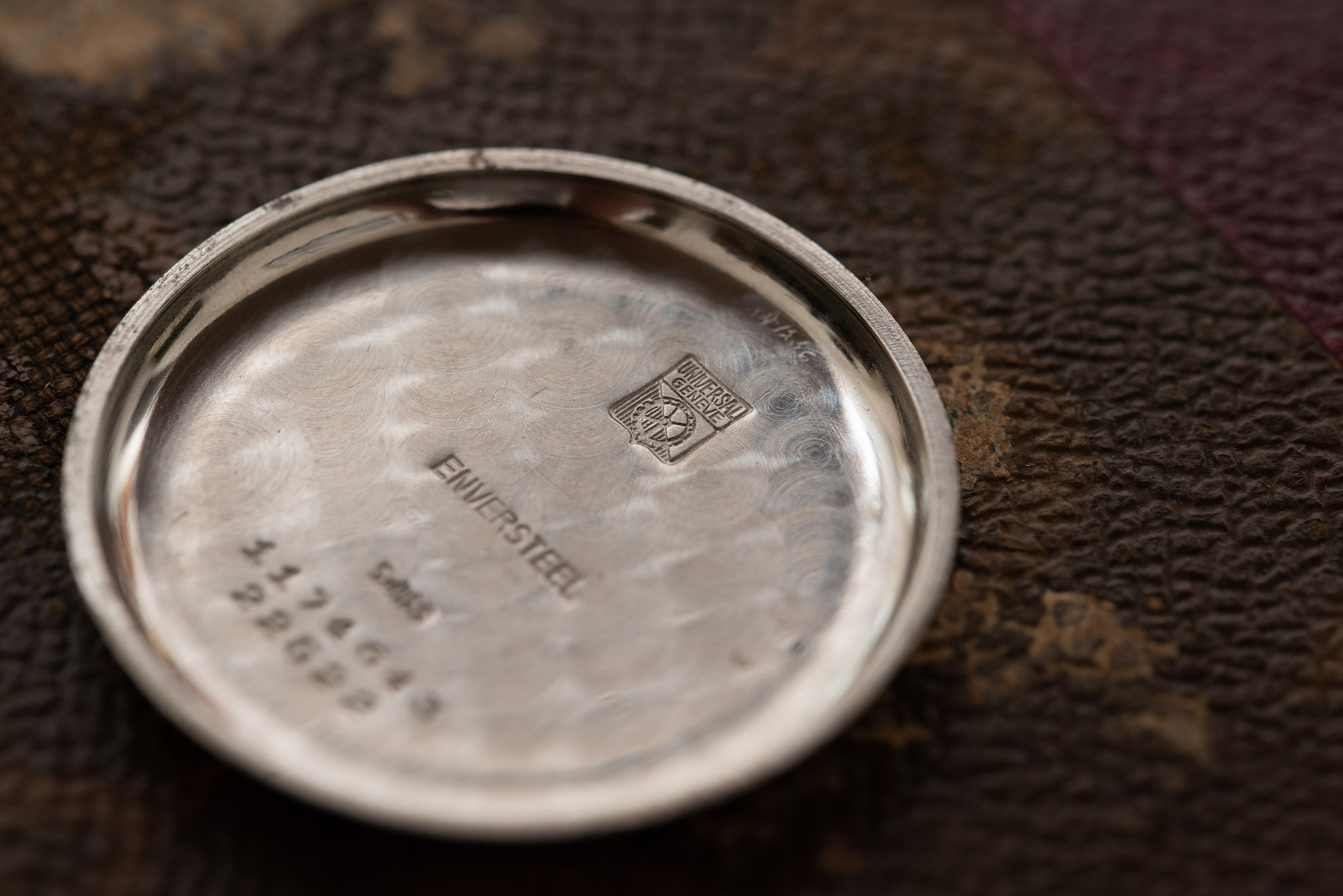 UG’s transition from a 4 to 5 digit reference number makes the understanding of references simpler. If we look at the Film Compax reference 22522 as an example, this would be the breakdown:

…they were likely made for the US market 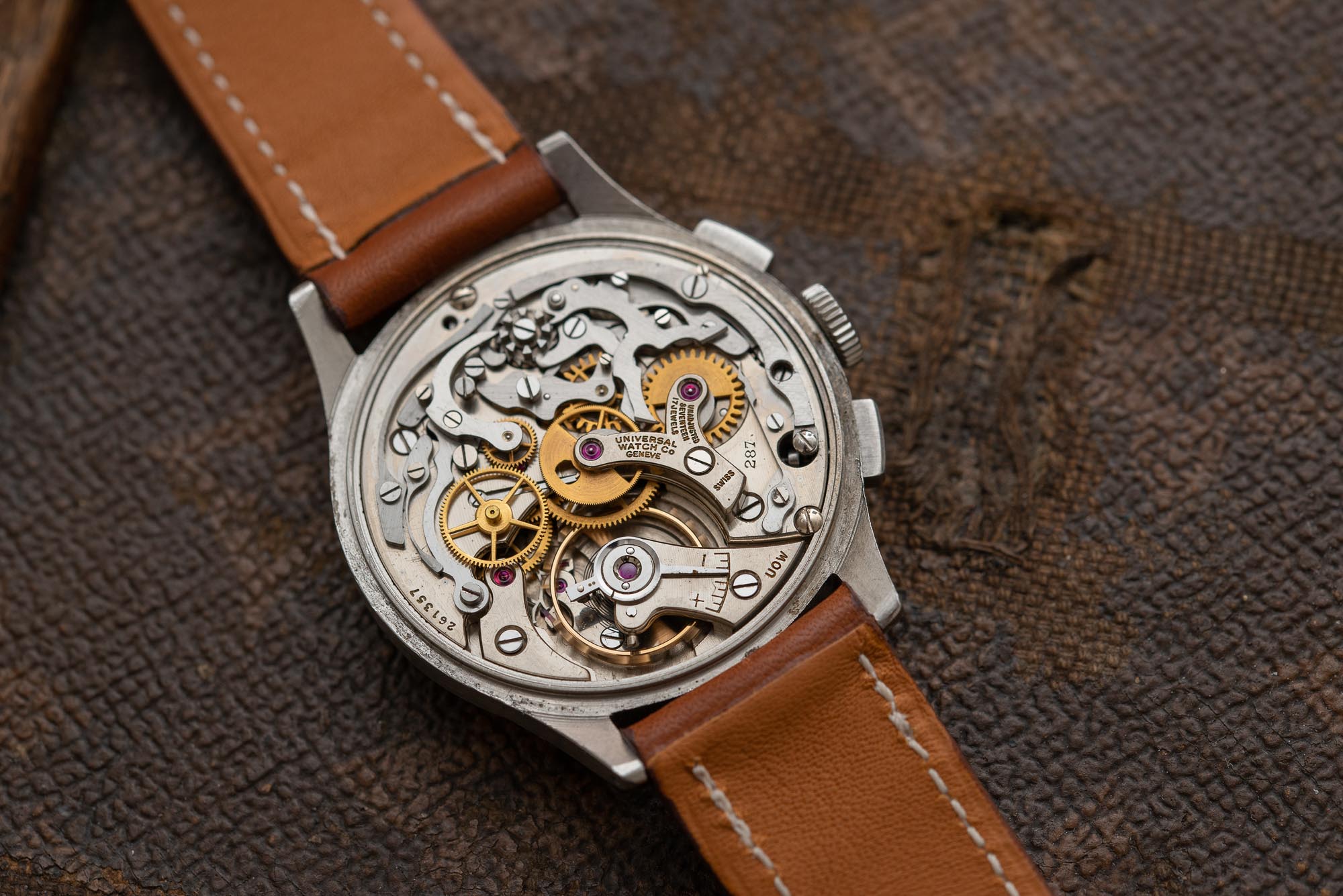 From the observed sample, there is certain consistency regarding the caliber UG 287 movement type. This calibre used was Universal’s second larger after the caliber UG 292 and it was based on the UG 285 but had a wider base plate. The ‘5’ in 22‘5’22 refers to the larger calibre. Additionally, many of the known examples seem to house a special 287: a rhodium plated ‘white’ movement, as opposed to a brass/gilt plated yellow movement. There seems to be a certain correlation between ‘white’ movements and US exported ones. This notion is further confirmed by the ‘UOW’, the US import code for Universal Geneve, signed on the balance bridge, suggesting they were likely made for the US market.

Of the 7 known examples are also all in steel, but there exists a possibility of a 14K gold case (14K was typical for US market) according to an old advertisement. Since a 14K gold example has still not surfaced, it may have only been offered in the advertisement and never produced. We hope to find an example one day. 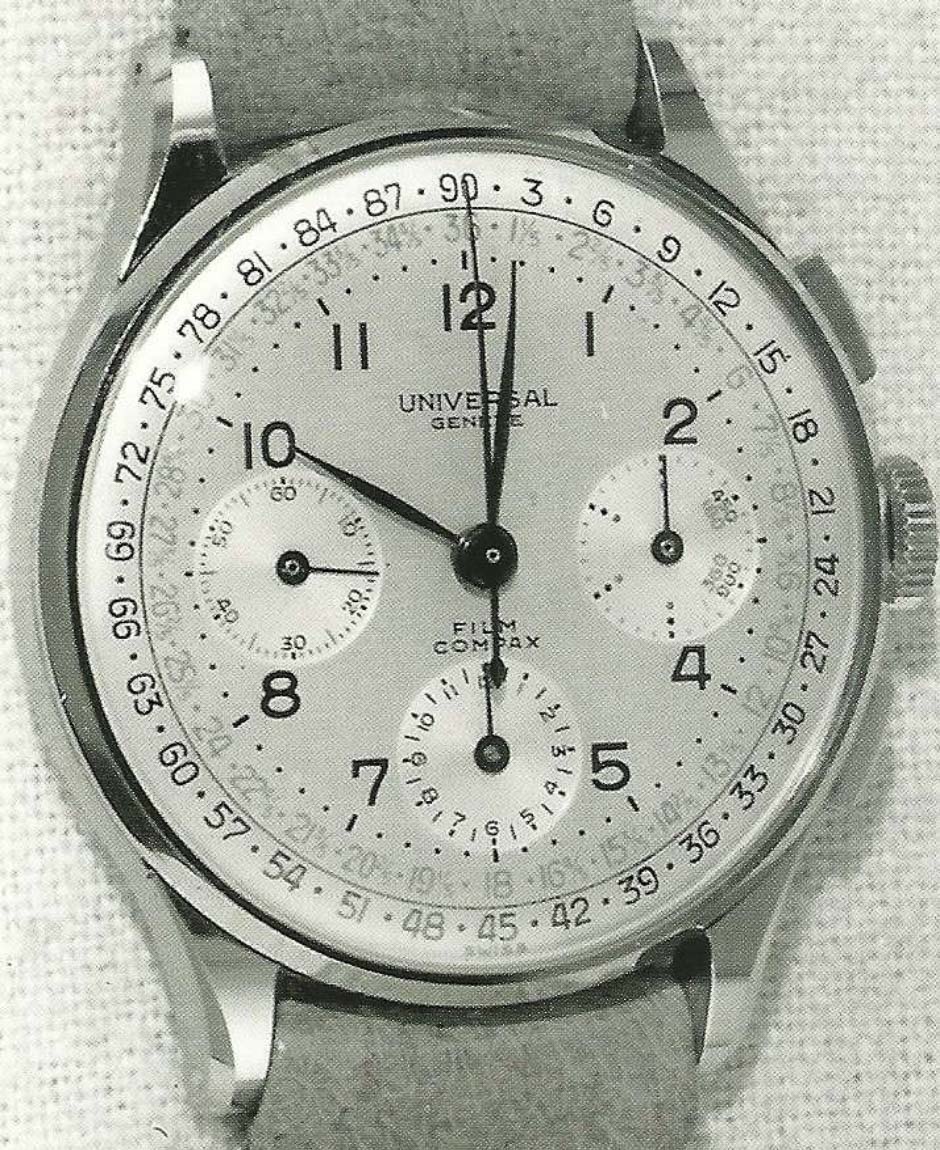 Film Compax as pictured in the Universal Geneve Archives.

Another interesting trait of the watch is the dial. It seems that almost every element of the cliché (image plate), from the ‘Universal Geneve’ signature, to the scales, to the counters to the ‘Film Compax’ seems to have been made uniquely for this dial. As can be noted from the following macro pictures, the typography is very heavily seriffed and is unusual compared to signatures on other dials from the same time. A plausible hypothesis would be that UG developed a totally new cliche for the entirety of the dial, which included the signature. 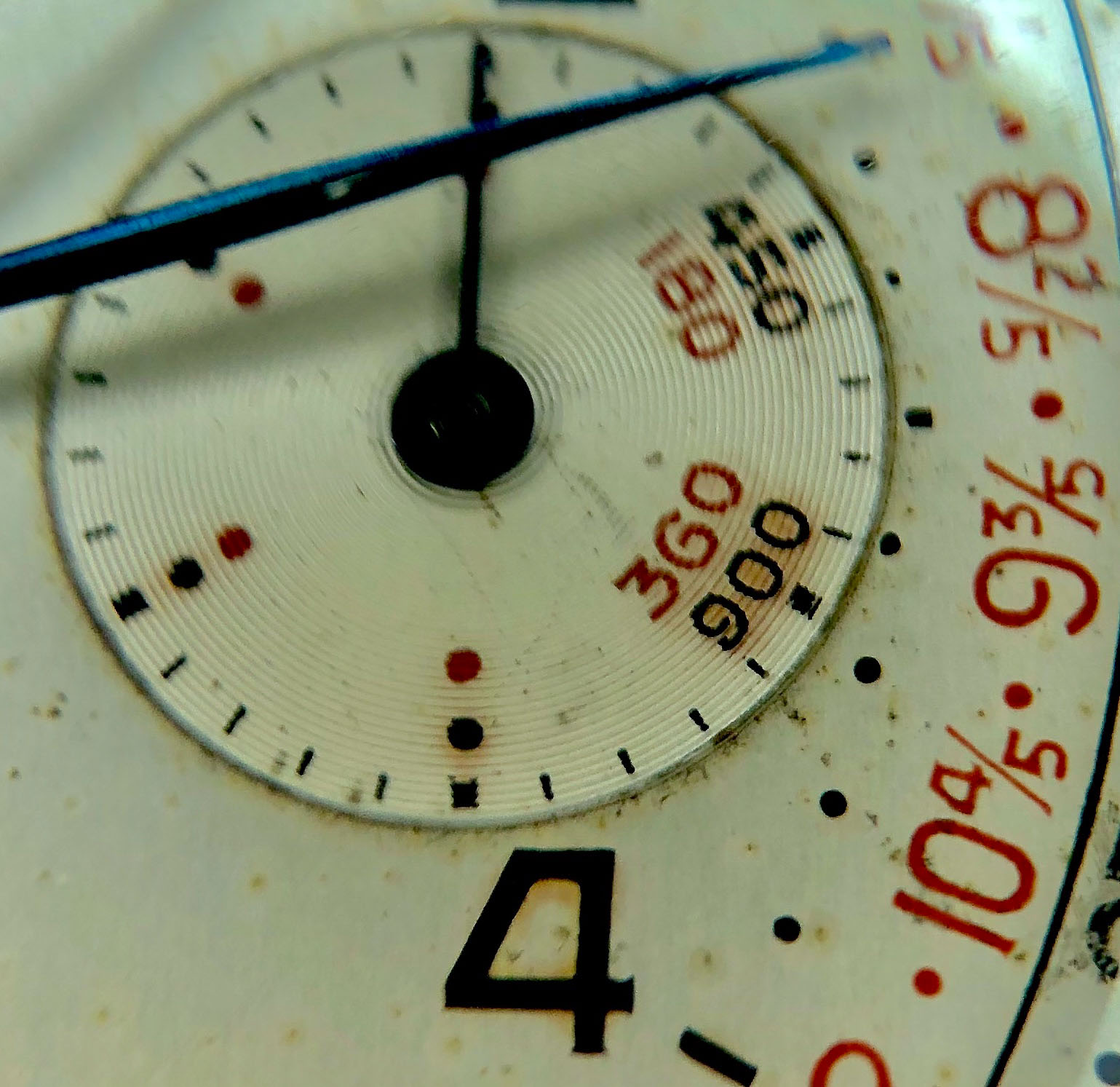 A detail of the minute register

The Film Compax Signature on the dial 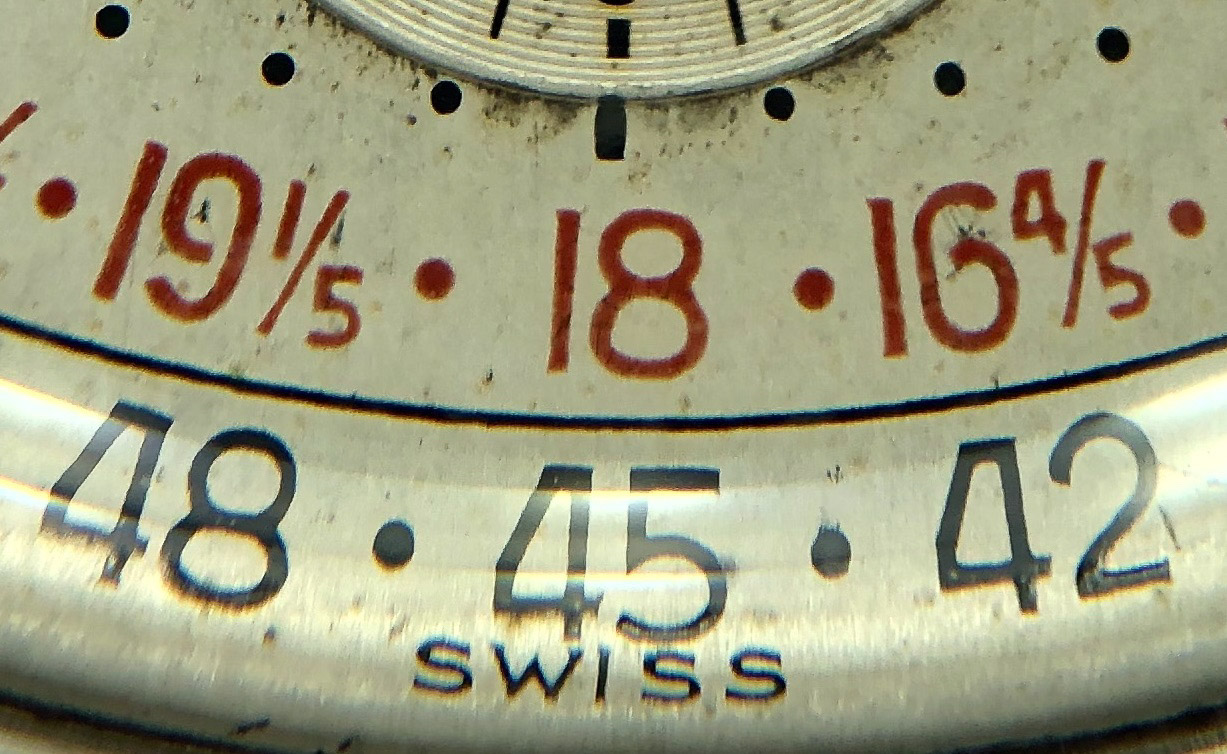 The Swiss Designation at the bottom of the dial

Further evidence that the Film Compax was intended for the US market is the fact that the scales are in based on the Imperial System (feet as opposed to centimetres) and there is an original advert mentioning the availability of the Film Compax from the Henri Watch Stern Agency in New York, the official importer for Patek at the time in the states.

The following advertisements are from the 1940s and depict the Film Compax as it was presented at the time: 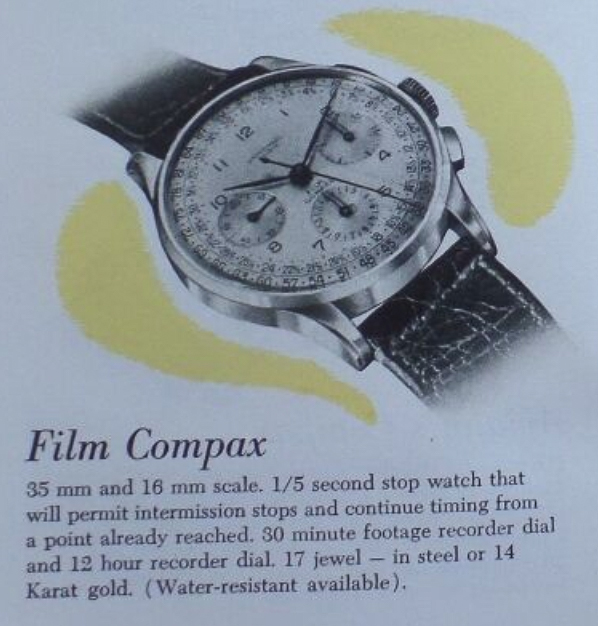 Advert confirming the possibility of a 14k example. 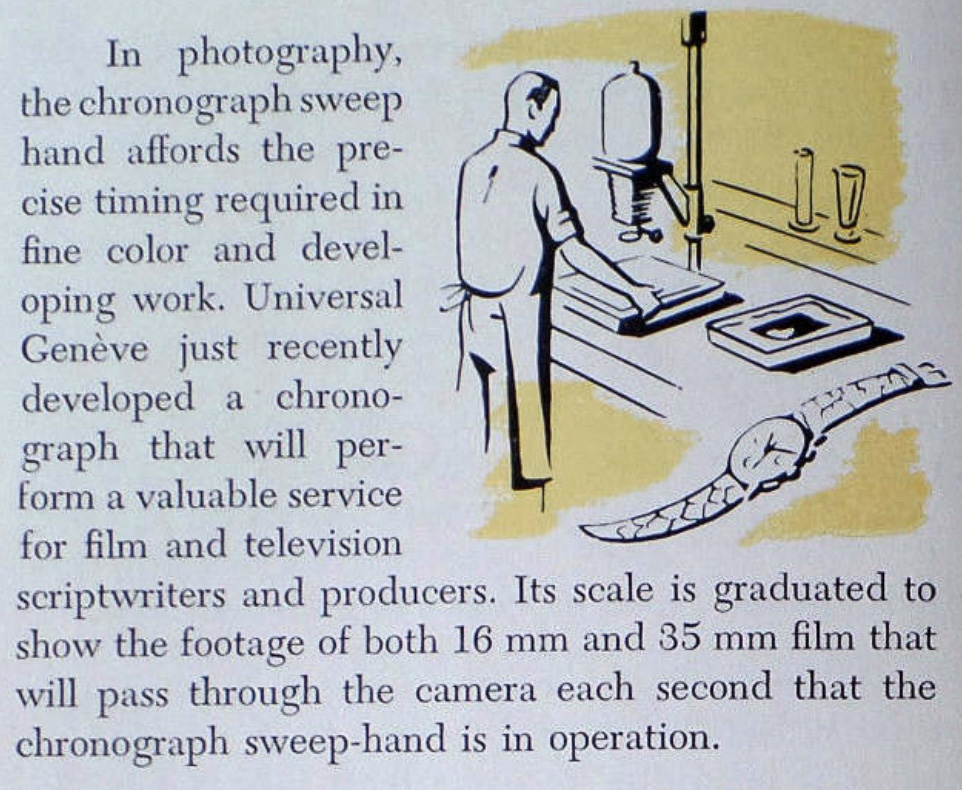 Advert regarding the functions of the Film Compax

The following table is a summary of the 7 known examples up to date.

Pictured are the examples known: 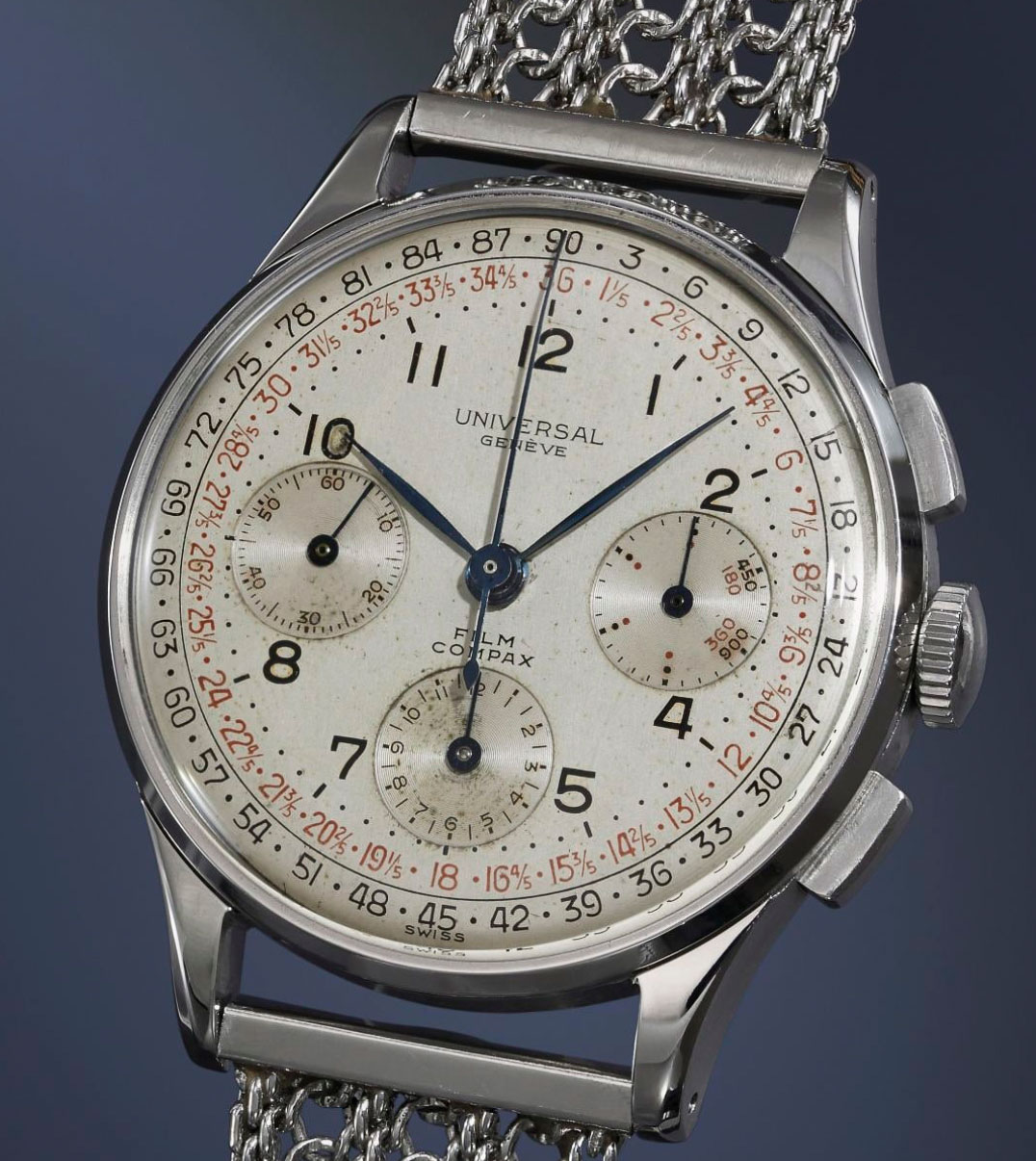 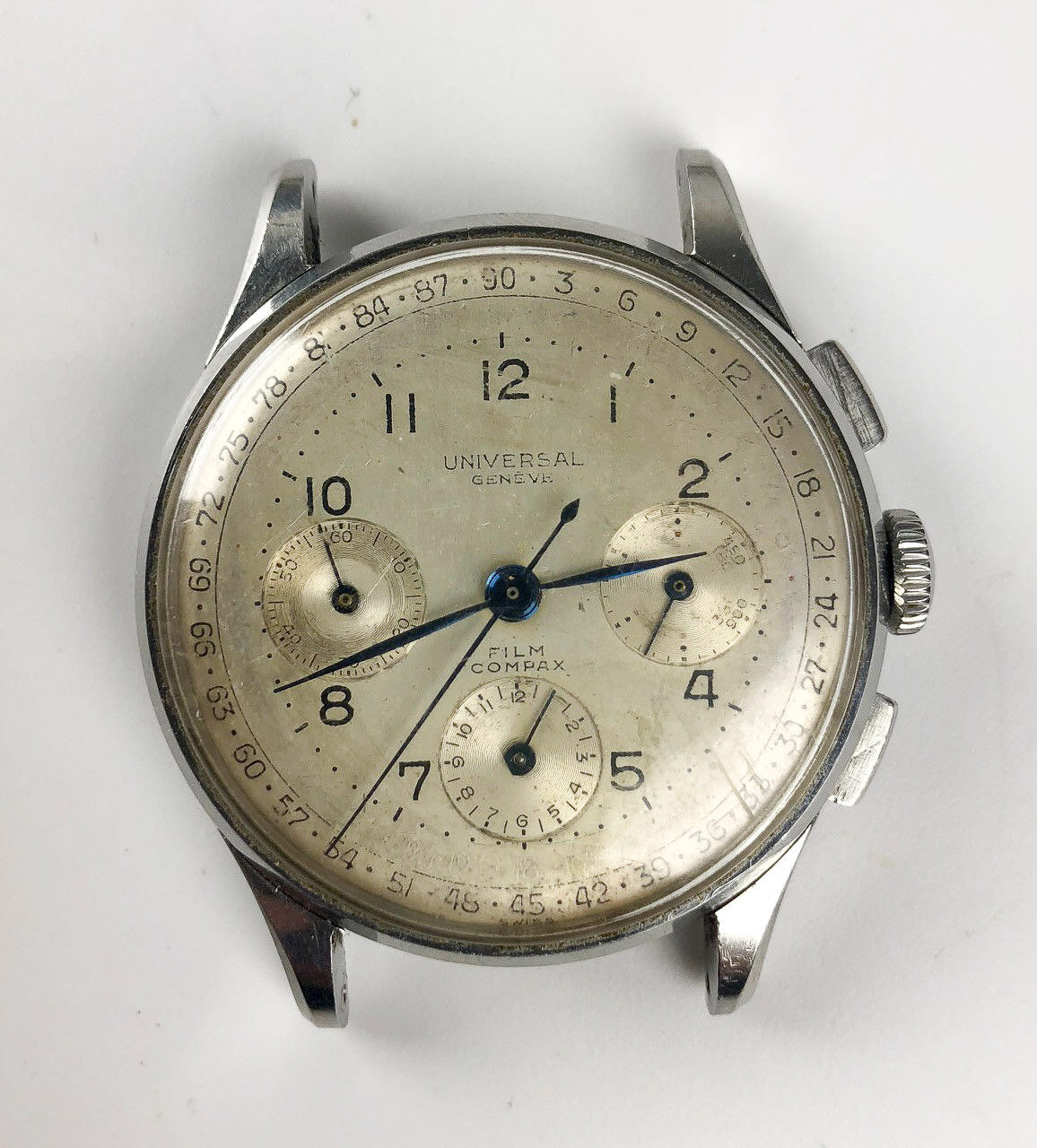 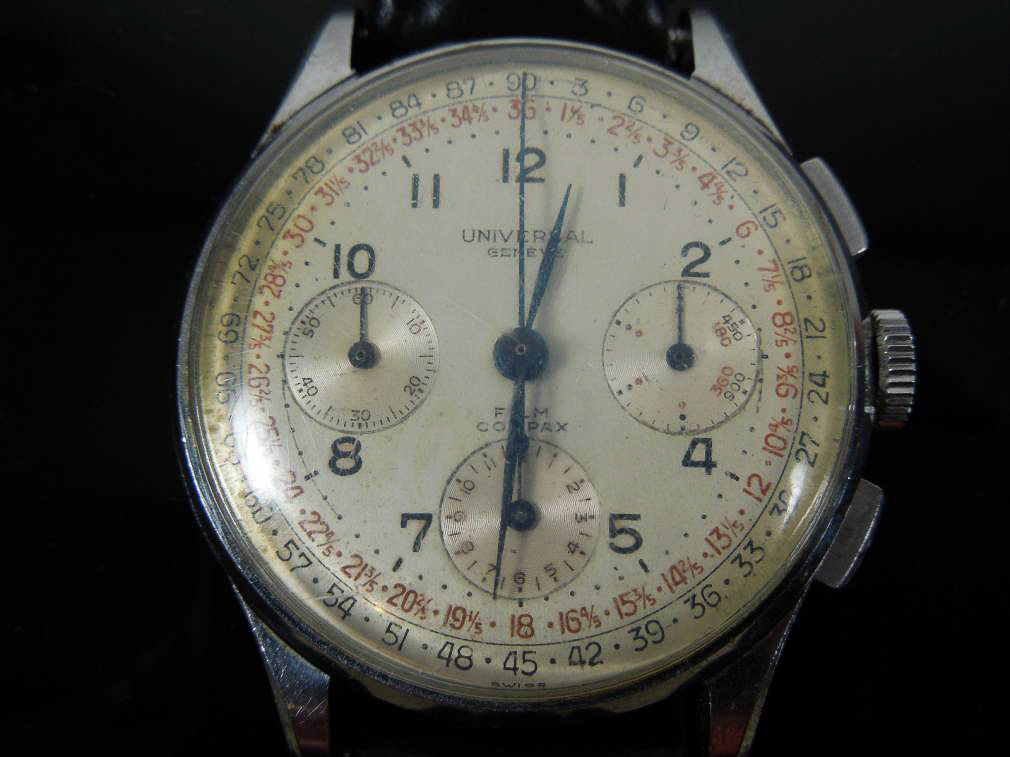 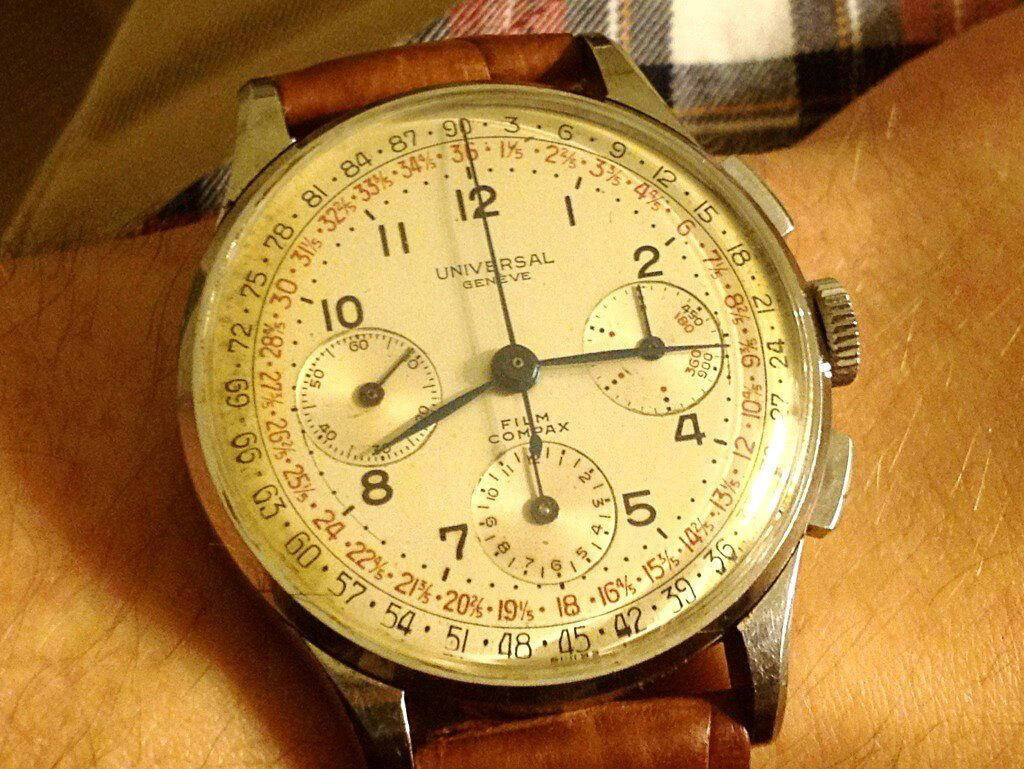 Same as above (Omega Forums) 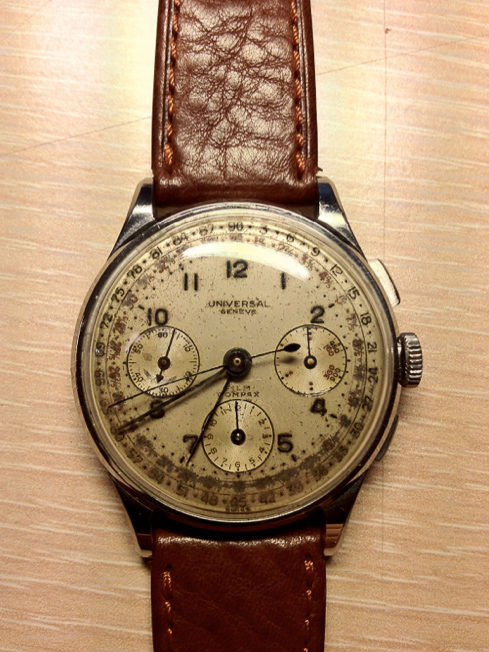 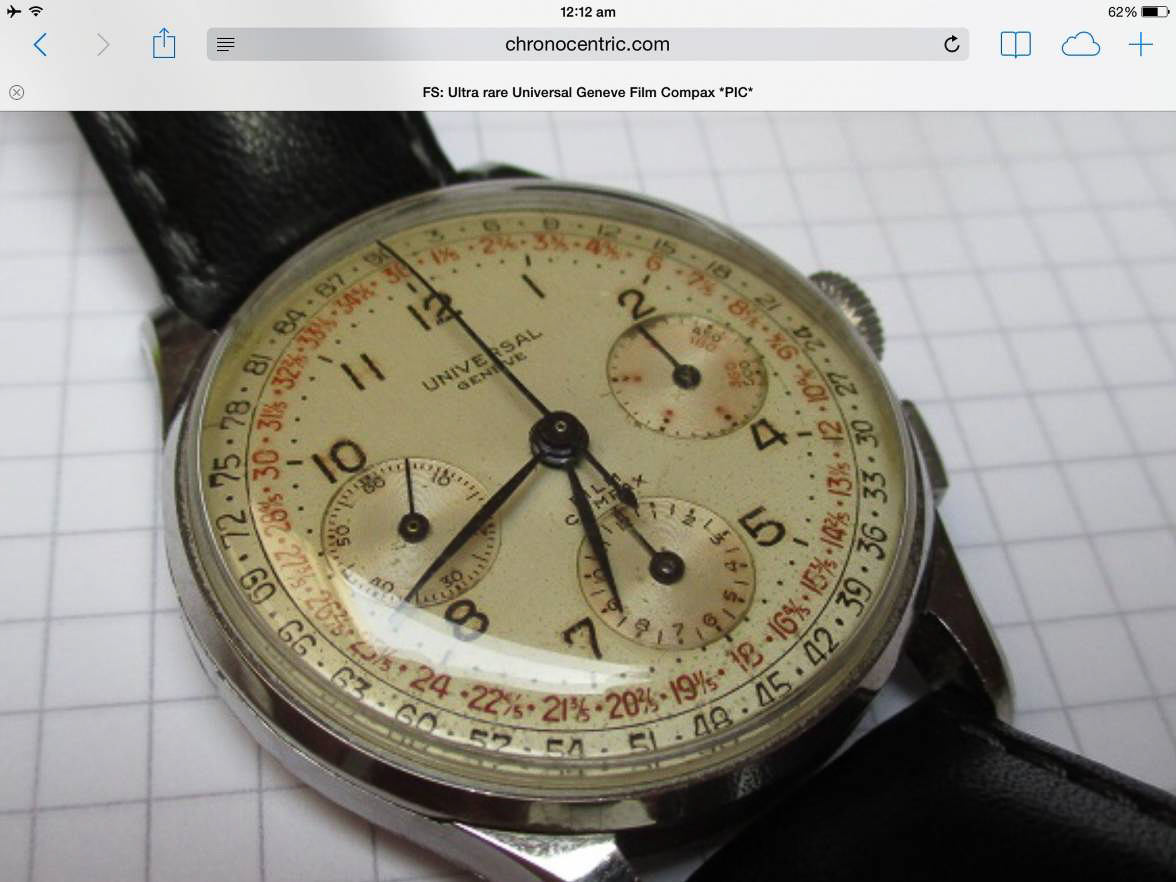 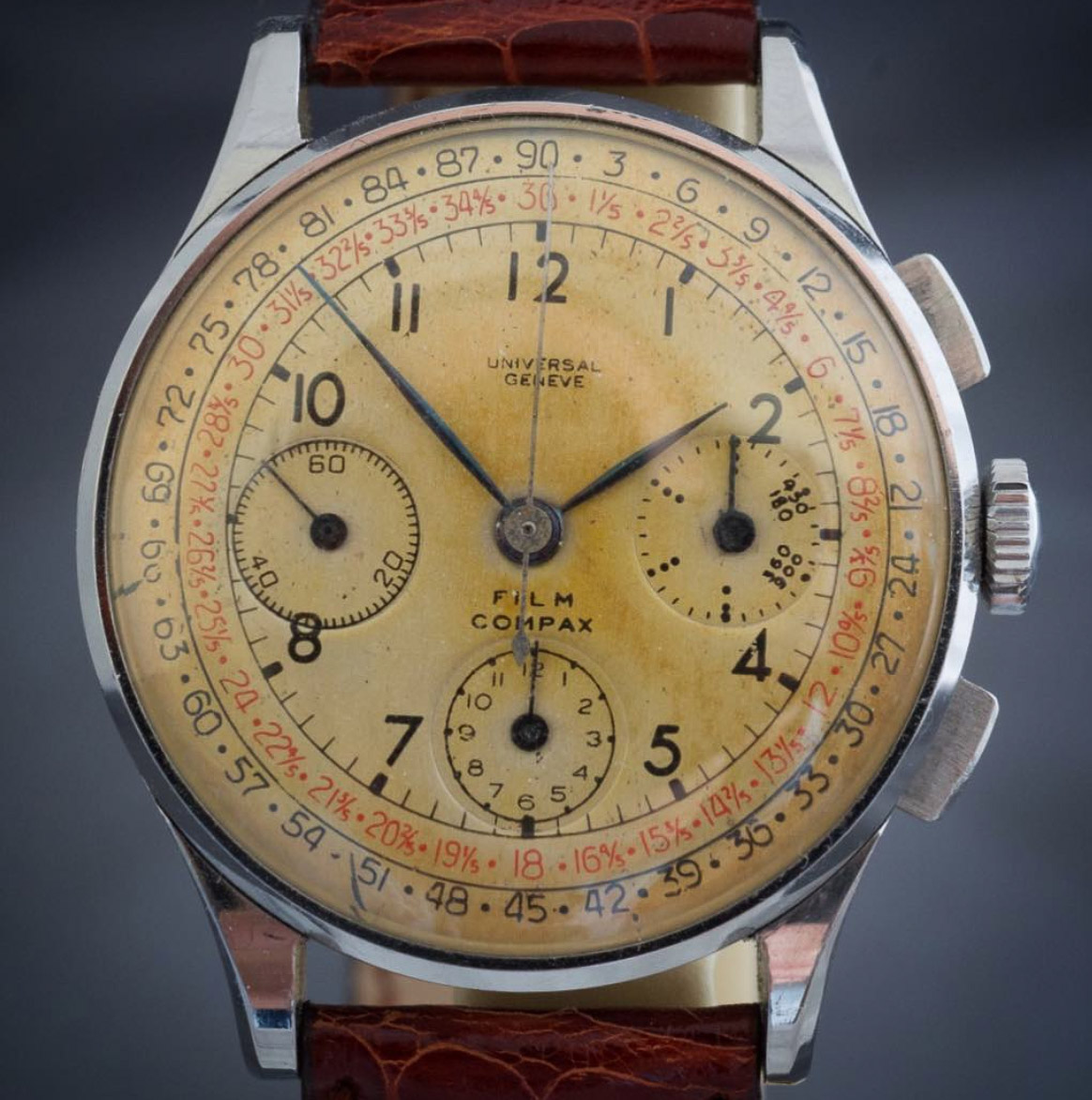 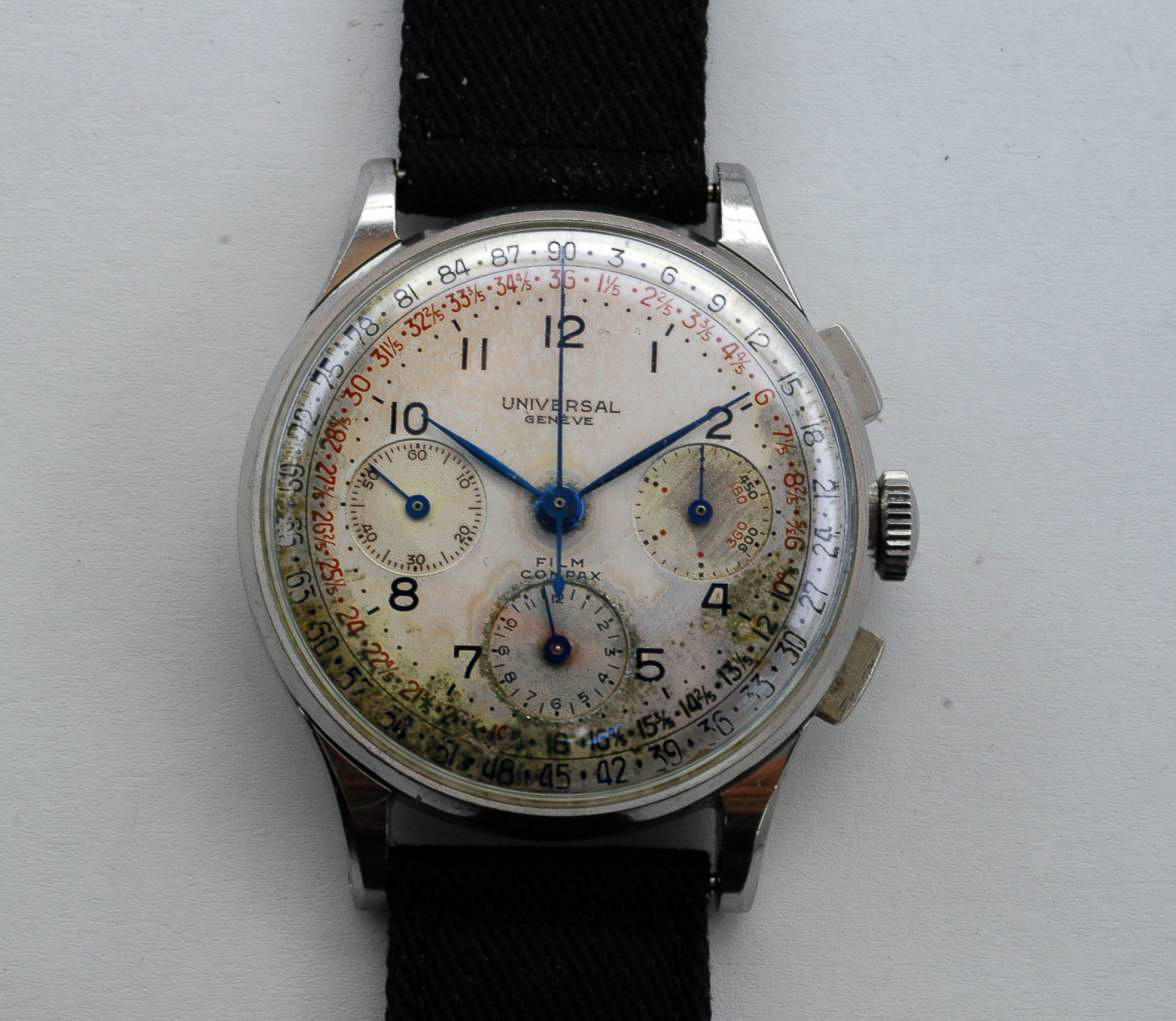 A big thank you to Italian collector & Universal Geneve aficionado @Mr.A. All research, as well as the write-up, was done by both of us. 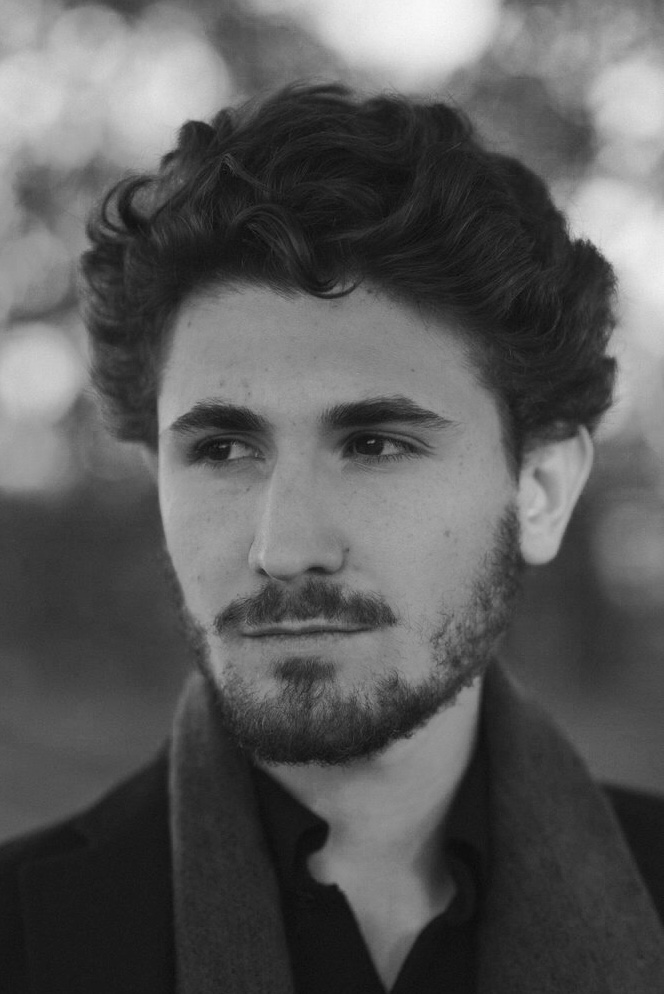